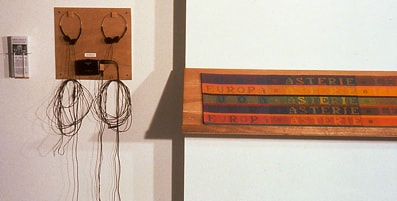 'Arachne's tapestry' detail
Arachne's Tapestry II, 1995
30.5' x 13" handoven cotton on compu-dobby loom, + a sound track produced by composer Marc Patch at the Banff Centre, with voices of Janis Bowley and Sandy Vida, based on Arachne's story from Ovid.  Tape player with 30' head phones + printed brochures in English and Polish (about the 21 women named); 1995

Ovid tells in metamorphoses of the human Arachne, who challenged the goddess Athena to a weaving competition and they each completed a tapestry with specific narratives. Athena showed how humans were punished for forgetting the power of Gods and Goddesses over humans, as a warning. Arachne depicted 21 instances of 'deceptive seductions' by Olympian Gods to mortal women. Athena, in her anger tore the tapestry apart and Arachne, in her sorrow, tried to hang herself so Athena, regretting her rash act, changed Arachne into a spider, an older and self-generating weaver, but silencing the woman. 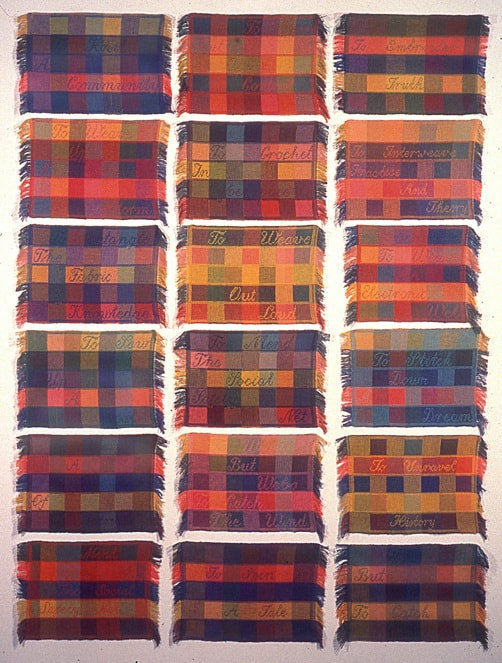 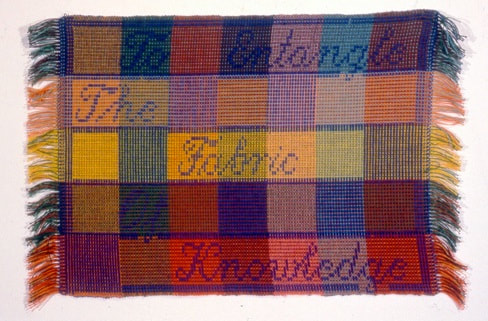 to weave but webs to catch the wind 1998
(a series of 18 placemat sized pieces, handwoven cotton with pick-up)

Text as textile: How can we interweave truth and lies; what kind of materials and pattern will represent truth? Will it be transparent or golden, black or white?
to spin a tale

Some texts, based on popular figures of speech about textile activities, will be familiar, others will yet become so in the future.
to weave a web of lies and truths

There is a long tradition between weaving and the telling of tales, particularly when women work together. Fairy Tales evolved in places reserved for communal spinning, thus explaining some of tales about poor girls catching rich princes through their spinning
to unravel history

Weaving as a woman's voice has several important roots. Philomela who had her tongue cut out by the man who raped her, wove her story into a cloak; it reached its destiny as a secret woven language, deciphered only by her sister.
to stitch down a dream

My mother often has appropriate sayings for important events, and I find the difference between the trite and the profound to be a very narrow line, divided only by a fine thread